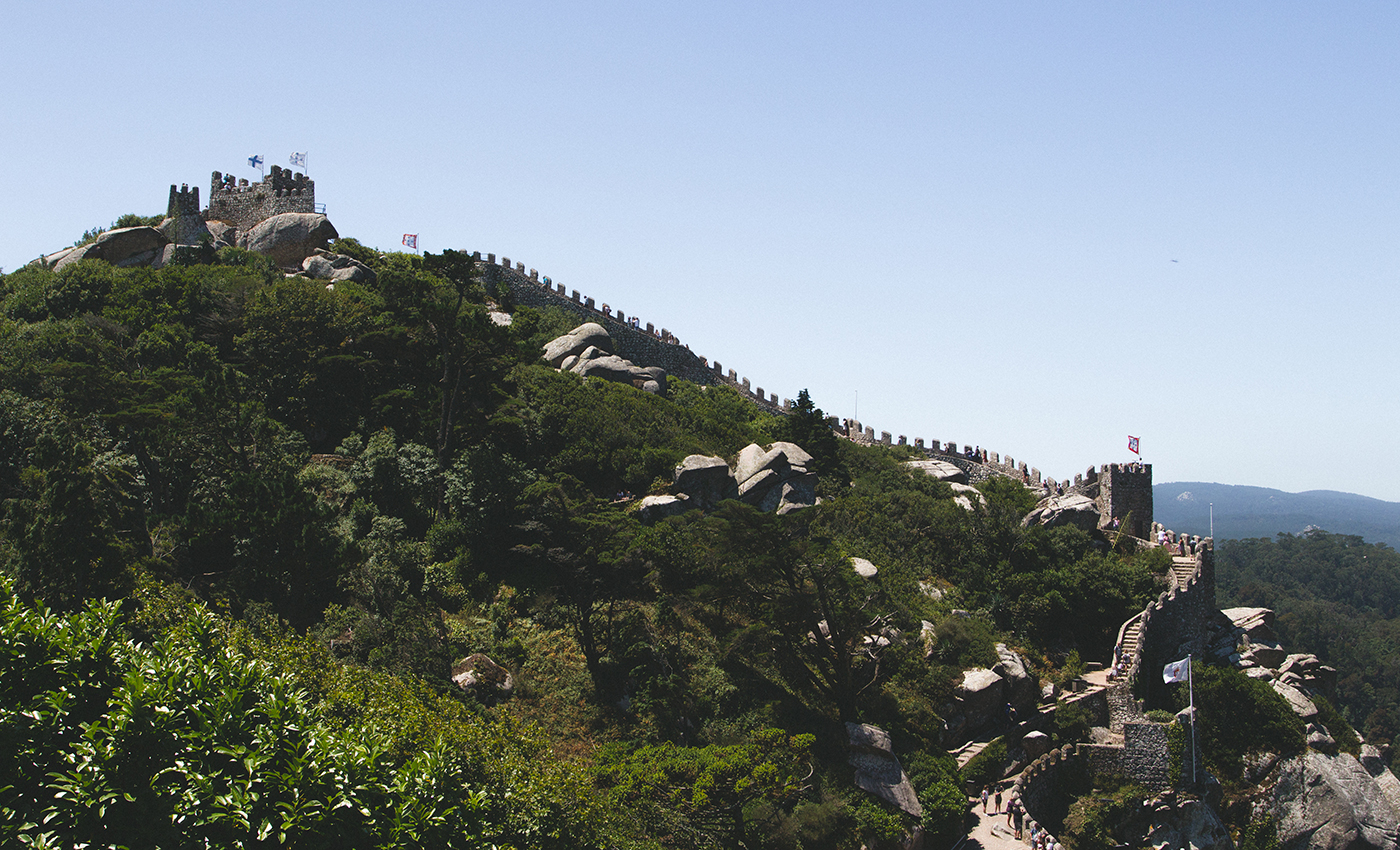 The UNESCO World Heritage Site that foreigners and locals alike tout as the one place to visit when traveling to Lisbon. Whether it’s for a day trip or an extended stay, Sintra is a wonder all its own. After our own travels and mix ups during our visit to Sintra (July 2017), we couldn’t help but compile a list of tips and things we wish we had known before embarking. These tips are based on our own experiences and are in no way comprehensive or exclusive.

If you’re curious like we were and want to know what to expect, let us take a stab at it. In the historic city center, cobble stone streets create a small network of cafes, wine bars, and shops selling Portuguese jewelry and handmade goods. Taxis and tuk-tuks sit outside the square, in the shadow of the National Palace of Sintra. But Sintra isn’t just a city center, it’s a municipality. 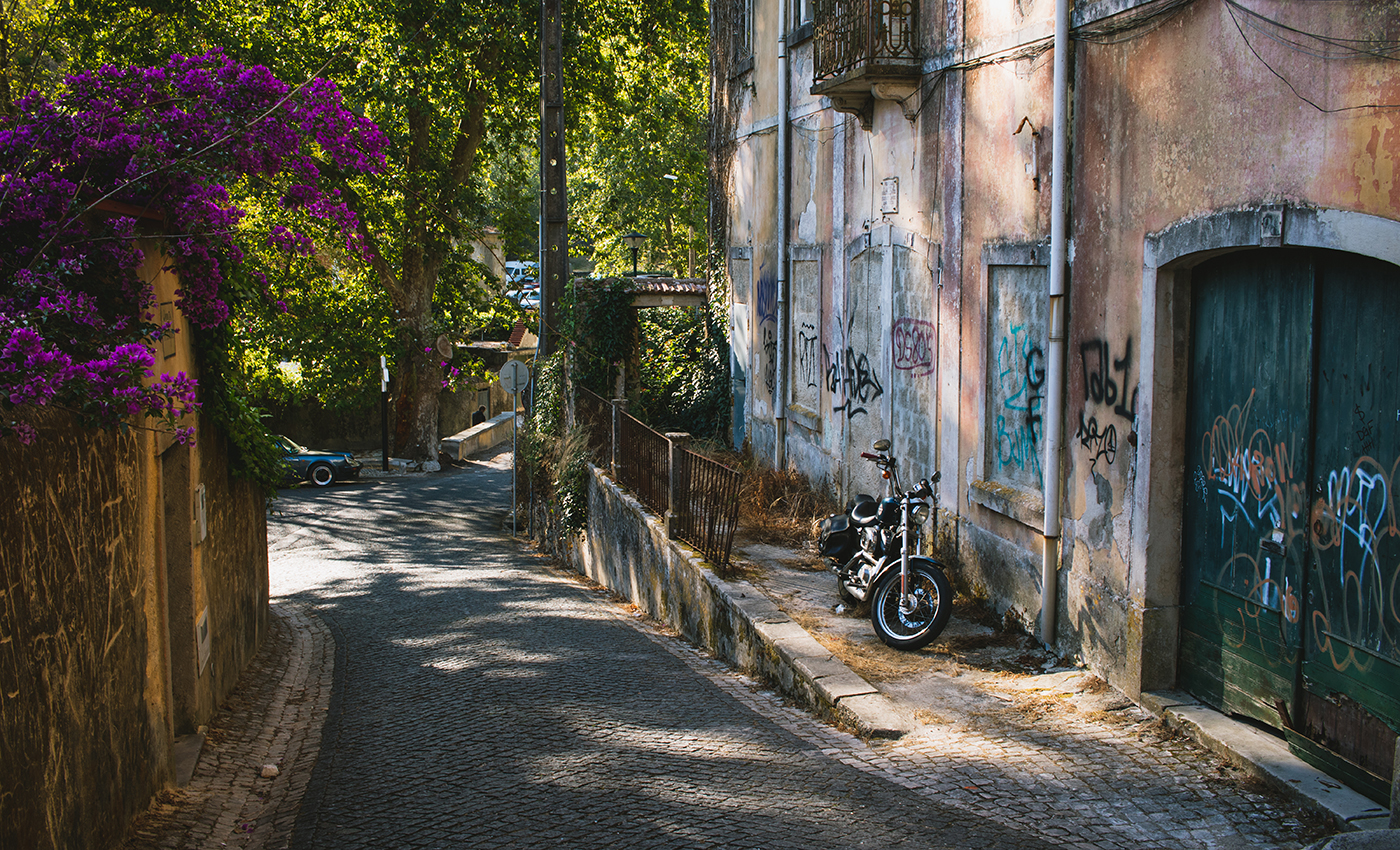 Roads lined with tall stone walls lead outside of the city center to dense wooded areas with sequoia trees, ferns, and moss covered boulders. Palaces and private, lavish estates are around every corner. Though, watch out, as cars drive fast and leave little room for error. You won’t see many restaurants or bars as you wind around the hilly area, but as the roads widen other villages and towns pass by, offering a place to stop for a bite to eat. The coast you must see, which is about a 30 minute drive depending on which beach you prefer to see. We highly suggest taking a day to be a tourist, and another day to pretend you’re a patron of the Sintra coast. Heck, get some salt in your hair! 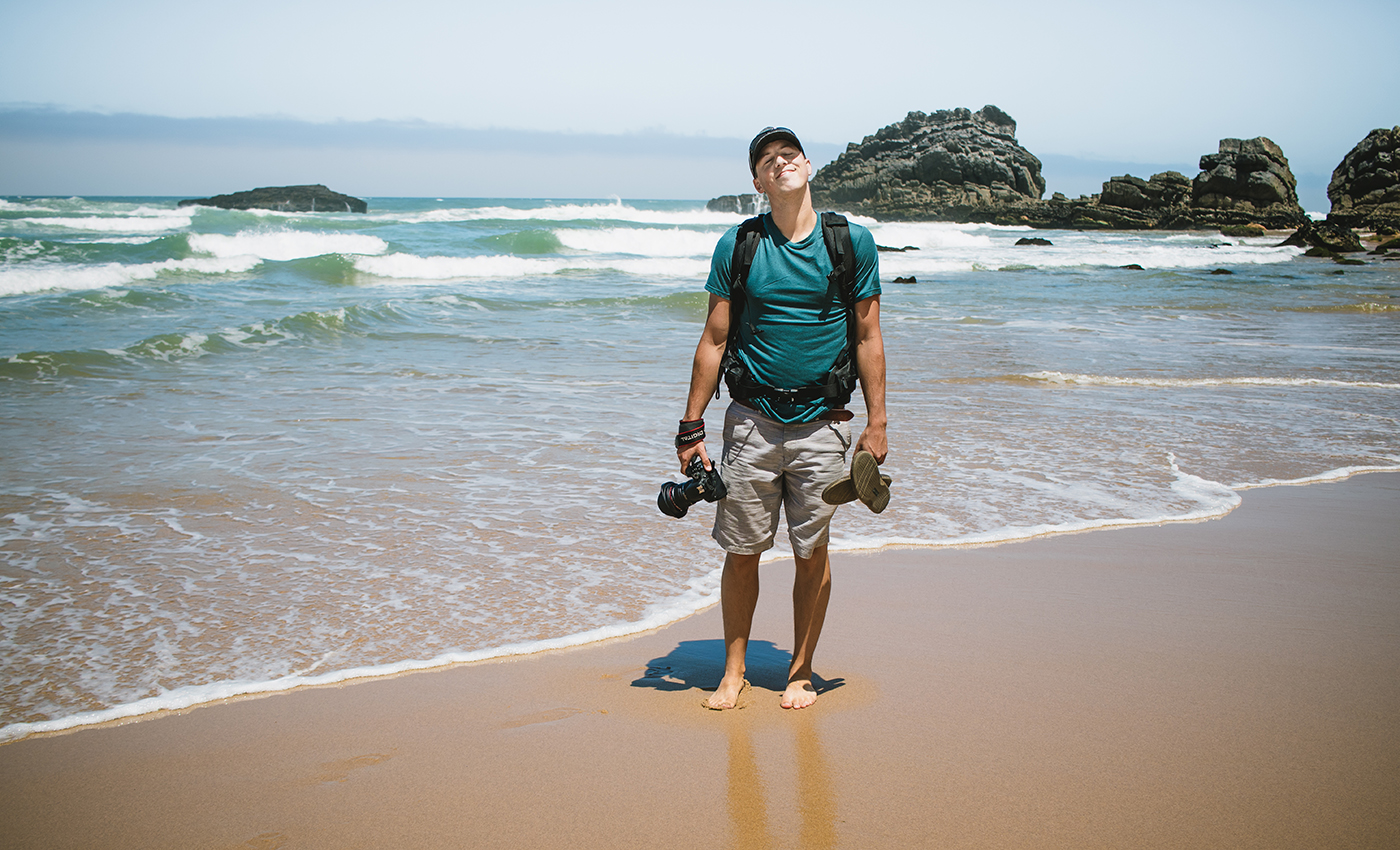 Of course, we were not able to do everything that Sintra has to offer, so this is a tricky one. In the two days we were there, we were able to see parts of:

There are castles and palaces to tour both inside and out, and beaches to the west that boast some of the best beach locations in Europe, and even the most western point in Europe (Cabo da Roca). However, Sintra has a lot to offer that not even we’re aware of. We recommend doing your research and picking a few places, especially if you plan to spend just 1 to 2 days in Sintra. 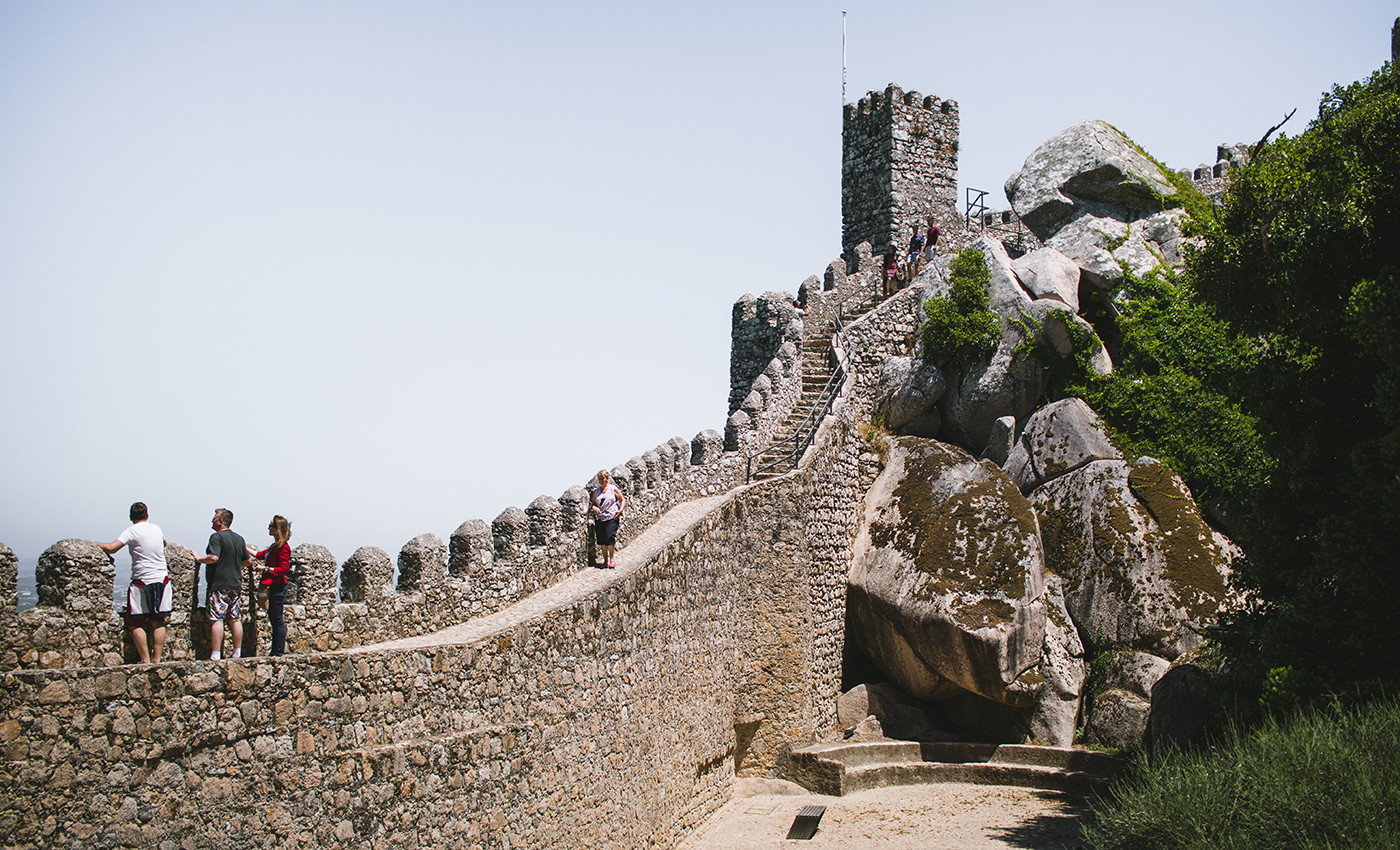 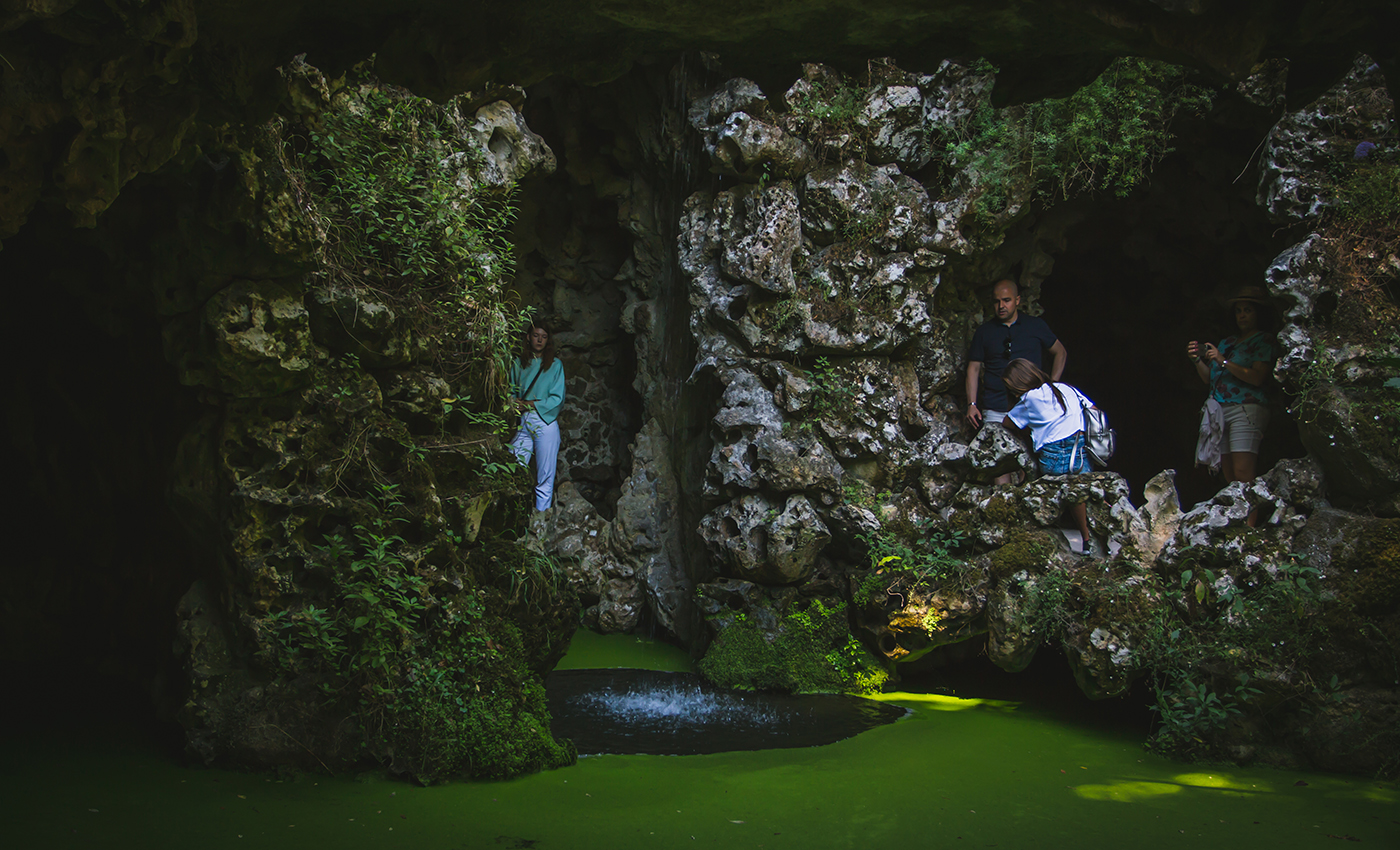 3. How much time to spend in Sintra

We spent two days in Sintra, and felt it was the perfect amount of time for us. If you really want to discover Sintra, we think between 2-3 days is the sweet spot. Here’s why:

Because transportation in the city center is congested, getting around on a busy day may suck precious time from your busy schedule. Most sights close between 5pm and 7pm, making it difficult to sightsee after tour buses leave. We suggest doing your research about what you want to see and if you’re interested in seeing more than 2 or 3 sites (Pena Palace and Moorish Castle can be done in one day), spend the night. If you’re able, get out of the chaos of the city center and explore the coast or other villages. We visited Azenhas and Adraga beach, slowing it down and getting away from it all. 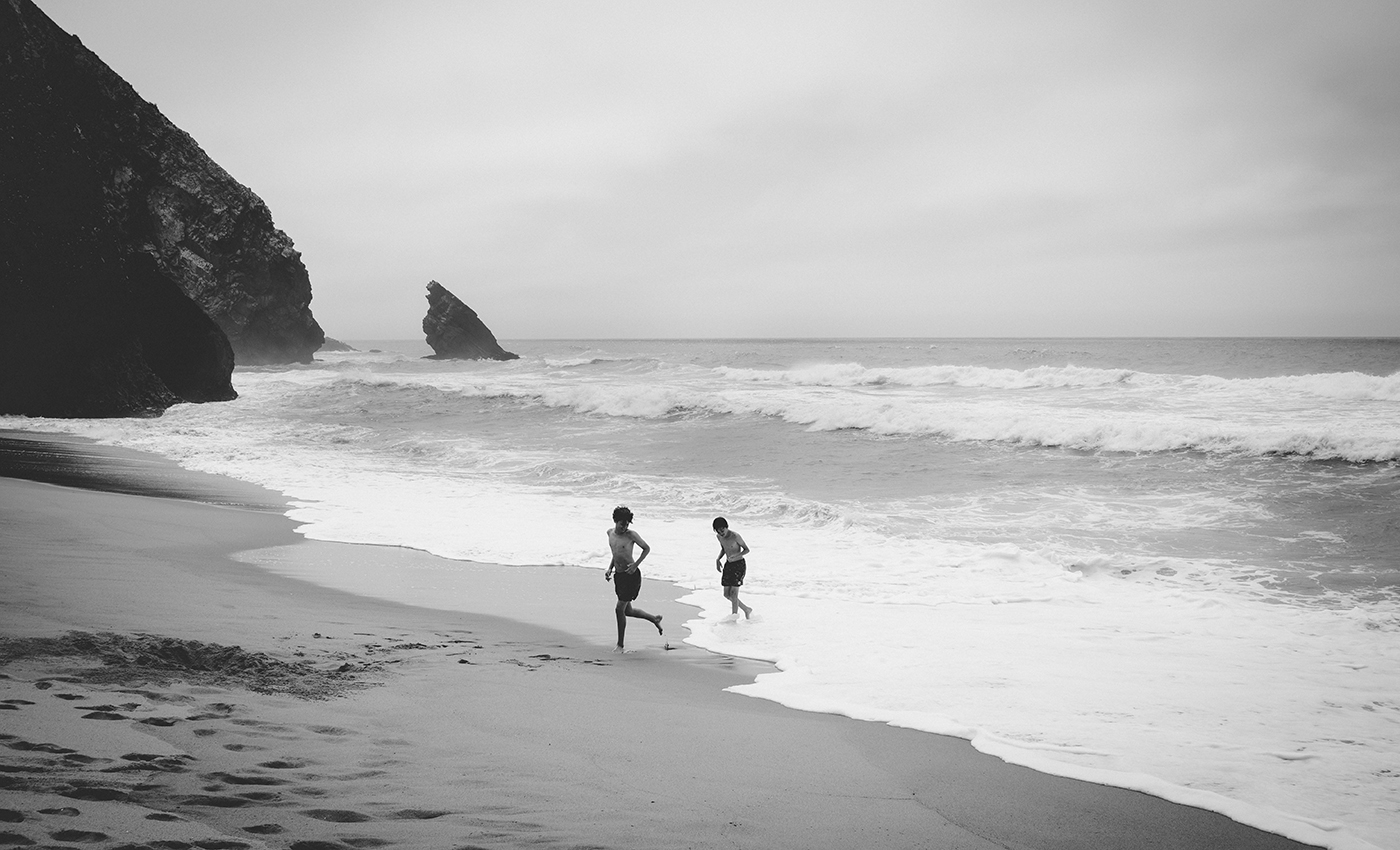 The fastest and cheapest way to get to Sintra is by taking the train from Lisbon’s Rossio Station. It costs about €2 per adult each way and takes about 40 minutes to get there.

Lisbon sells reloadable “Viva Viagem” cards that can be used for the buses, trains, and the metro. You can purchase these cards at metro stations for €.50, and then add any amount of value as you like. If you are staying in Lisbon for a week, filling up the card to €20 should suffice. You can use this card to get to Sintra.

The 2nd to last stop is called Portela de Sintra; do not get off here (like we did). Get off at the last stop, simply called “Sintra”, which is .9 miles east of the city center.

We visited Portugal in July, a hot and busy month. There were loads of tourist buses streaming into Sintra starting around 10am. We can’t say we’ve been to Sintra during any other time of year, but we do suggest avoiding the busy summer months if possible.

Regardless of month, visit early in the day by taking the train in. Most sites open around 9:30am – 10:00am. Pick your top sight to see first and make sure to be there when gates open. We were happy we did this in order to see Quinta da Regaleira before the crowds. 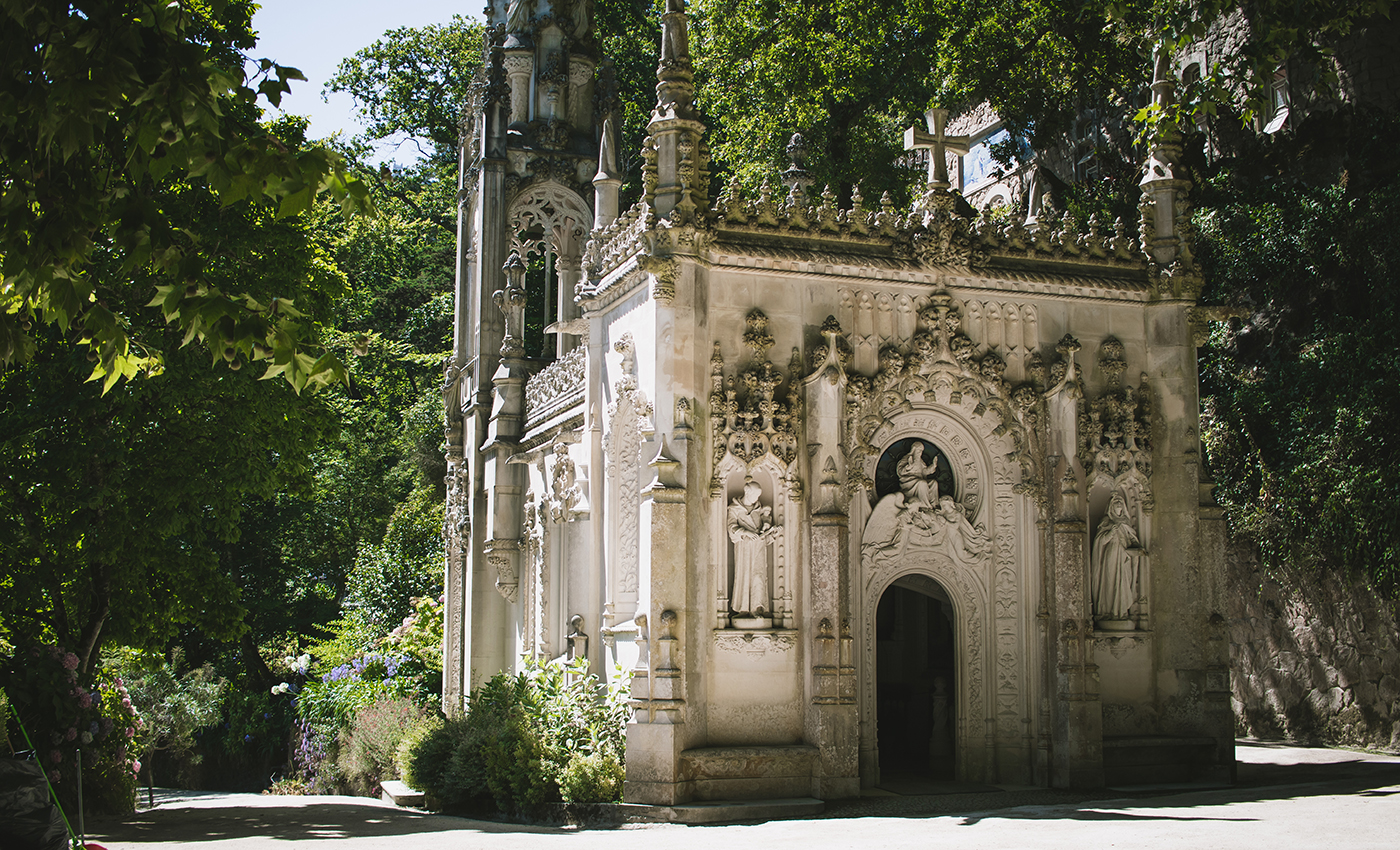 6. How to get around Sintra

Sintra, a UNESCO World Heritage Site, is old. Plain and simple. The roads in the city center and surrounding areas are very narrow and hilly, lined by old stone walls, and barely sustain the heavy tour buses (an issue the city is currently grappling with). There’s minimal space for pedestrians, though you can walk single file along the stone walls if you’re aware of traffic. We would never suggest a children’s stroller or bicycle on these roads, though it’s allowed.

Many people take the city bus to get around (there are just five bus lines with easy to read maps) or the ubiquitous City Sightseeing hop on and off tour buses, which have a one way route around Sintra. There are also many tuk-tuks and taxis, which we think are your best option if buses are full. Ubers are available, but only a few were in the area during our visit. Because parking lots are rare and street parking is a gamble, bringing a rental car into the center of Sintra, especially during the busy months, isn’t a good idea in our humble opinion.

Our experience in July was complicated by traffic in the city center. The famous 434 bus that bloggers write about was full and continued passing our bus stop (we suggest getting on the bus in the city center before it fills up). As such, we called an Uber, waited 10 minutes for it to get to us, sat in traffic halfway up the mountain, and then needed to walk the rest of the way because a parked car was blocking traffic. To say the least, getting around on a busy day can be a gamble.

A taxi driver local to the area suggested renting an electric car from a friend’s company called Go2Cintra (located right next to the Sintra train station), which we did our second day and highly recommend for those who are confident in their driving and navigation skills. The electric cars are really small, fitting just two people and two small bags. There’s no room for your grandma or your third wheel. So, while we can’t possibly suggest a foolproof method of transportation, be vigilant and flexible when considering your best way to get around.

The party ends around 6pm when many of the tour buses leave or end their tours. In fact, Sintra’s city center feels like a ghost town after dinner hours. During our visit, we finished dinner and sat in the main square for 10 minutes waiting for a taxi to pass, but found no luck. We ordered an Uber instead, though after 40 minutes of driving around and not finding our Airbnb, dropped us back off where we started.

If you do not speak Portuguese and find yourself in this situation, we suggest asking your dining establishment to call a taxi for you. Shout out to David from Restaurant Tasca do Xico for helping us out! 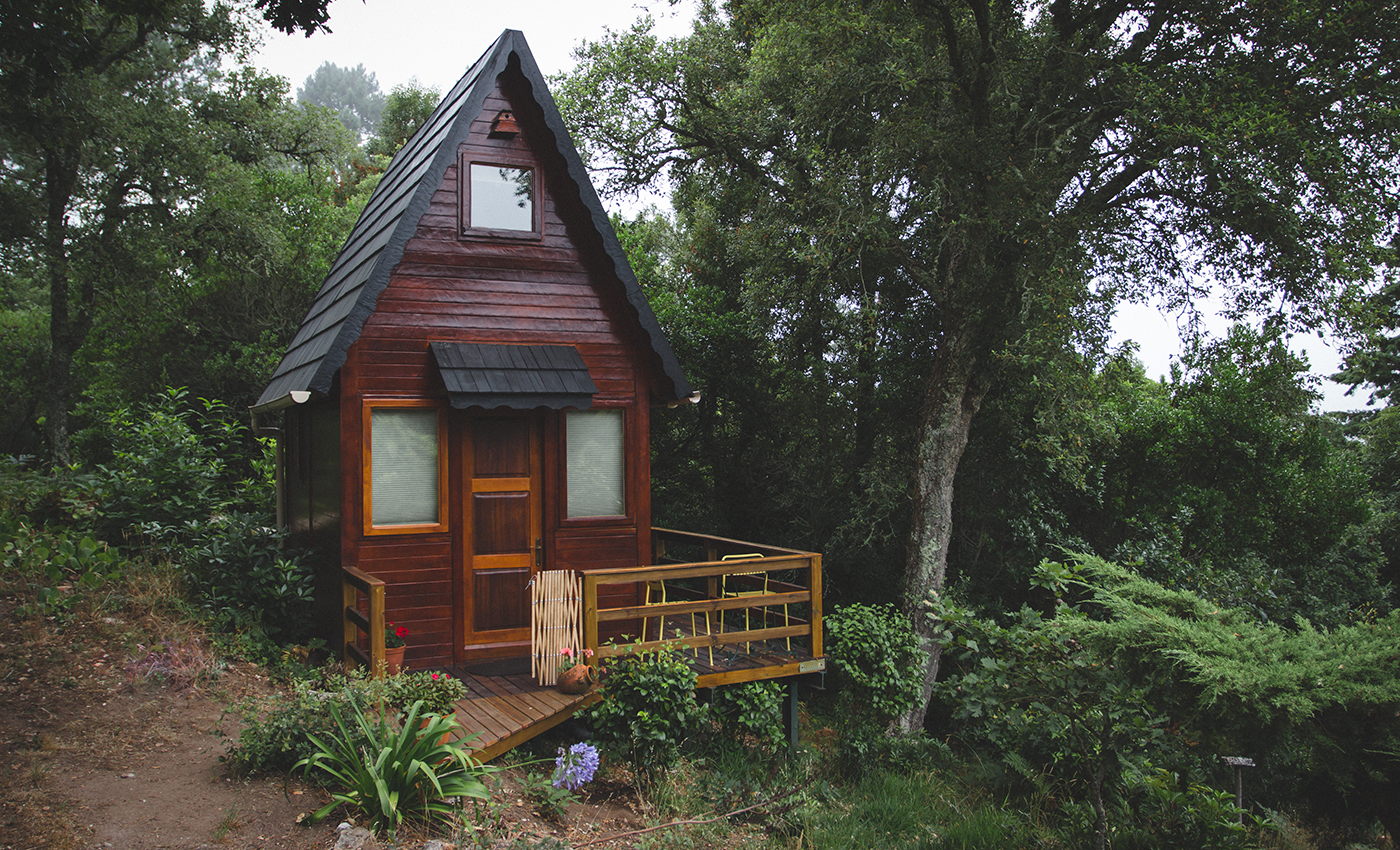 8. If you are spending the night in Sintra, stay near the city center

And if you plan to travel like we did (without a car but staying the night), we suggest sleeping near the city center where you can walk home. We stayed at a beautiful, secluded, Airbnb 5 miles from the city center and though our host was willing to call us a taxi when we needed it, we would have preferred to have more autonomy and likely would have been able to see more had we stayed near the center of it all, where it’s easier to reach public transportation.

As we said before, once the city center gives way to forest, there isn’t much but private properties. Pack snacks with you if you anticipate being away from the city for some time. 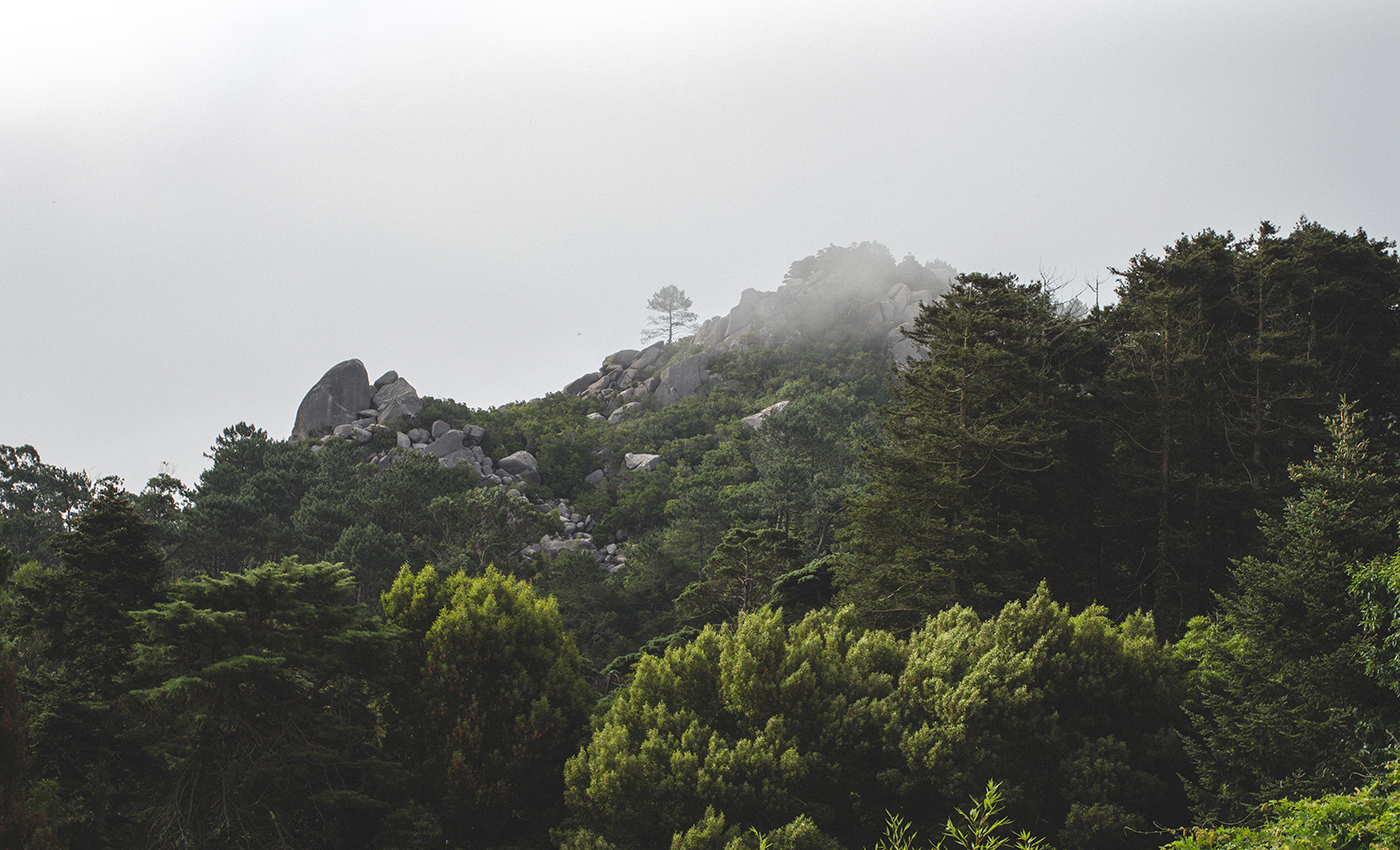 Do you have any other questions about Sintra? Email us.

This site uses Akismet to reduce spam. Learn how your comment data is processed.